Rajasthan Royals (RR) will be back in business after a two-year halt.

Rajasthan Royals (RR) stunned many with their shopping in just-concluded Indian Premier League (IPL) 2018 auction at Bengaluru. Known to invest more in young players, Royals gearing up for a comeback after a two-year halt have filled their new squad with experience and young guns. The big fish, Ben Stokes, has been roped in their lineup courtesy a whipping deal of INR 12.5 crores. The Steven Smith-led side look like a reincarnation of now-discarded Rising Pune Supergiant (RPS).

Here is a quick round-up of Royals’ squad ahead of IPL 2018 scheduled to commence from April 7.

Royals’ squad is look highly inclined by Smith’s choices. As a result of his presence, the team management have gone in with newcomer DA’rcy Short. The Australian has made a quick name post his blitz in ongoing BBL 2017-18. He is, at present, the leading run-scorer in Australia’s domestic league at an average of over 50. In addition, Royals have also included West Indies young all-rounder, Jefra Archer.

Jos Buttler will now wear represent Royals, whereas Ajinkya Rahane, Stuart Binny and Sanju Samson would look to commence their second innings with their previous franchise.

The biggest surprise from Royals’ camp came in form of Afghanistan bowler, Zakir Khan. He was bought for INR 6 lakhs. Jaydev Unadkat, last season’s leading wicket-taker, was sold for INR 11.5 crorers (most expensive Indian player in the squad).

Overall, Royals have shed their image of picking inexperienced players, and filled the squad with a star-studded lineup. They have also got the services of Ranji stars: Shreyas Gopal and Krishnappa Gowtham. 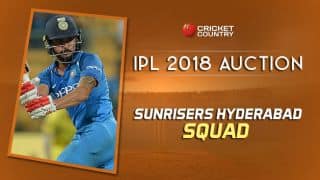