Rajasthan Royals wicketkeeper Dishant Yagnik said his team will be banking heavily on its medium pacers when they take on the heavyweights Mumbai Indians in the Indian Premier League (IPL) match here tomorrow. 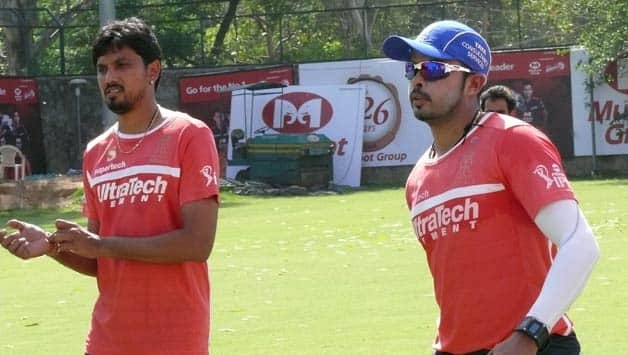 Rajasthan Royals wicketkeeper Dishant Yagnik said his team will be banking heavily on its medium pacers when they take on the heavyweights Mumbai Indians in the Indian Premier League (IPL) match here tomorrow.

“Undoubtedly, they [MI] are a very good team. Along with Chennai Super Kings and Royal Challengers Bangalore, Mumbai Indians too are very strong. But we are confident that we can get the better of them,” said Yagnik on the eve of the Royals vs Mumbai match.

“We have been banking on our medium pacers and till now they have done a good job. We hope they give us early breakthroughs and we are able to capitalise on it,” he added.

Asked about S Sreesanth‘s absence from the team’s net session today, Dishant clarified it was an optional session for the medium pacers.

“It was an optional session for the medium pacers. They have done a good job and they deserve this rest. Tomorrow is a big game for them and this break might give them time to regroup and plan.”

Speaking about the wicket at the Sawai Man Singh Stadium, Yagnik said: “At all centres we have sporting wickets and here too it will help both the bowlers as well as the batsmen. Our medium-pace attack has done well here and we hope it happens again.”

Yagnik, who has been recovering from a groin injury, said he was hoping to be fit soon.

“I am feeling better but such injuries take time. Hopefully, I will soon be fit,” he said. .

Asked to compare Rajasthan Royals’ former captain Shane Warne with the current skipper Rahul Dravid, Yagnik was of the view that they were similar in some ways.

“They both are tremendous captains. Both encourage youngsters. Dravid treats upcoming players at par with the experienced ones and gives importance to the ones coming from smaller cities, so that they don’t feel overawed.

“As far as strategies are concerned, Shane Warne was unpredictable, while Dravid is up to the mark and keeps things as simple as he can,” he explained.

Refusing to read too much into the inconsistent performances of players like Stuart Binny and Shane Watson, Yagnik said, “Binny is a batsman who can change the face of the game, while Watson had only one bad innings but he eased off pressure against Punjab by his fluent batting.

“Each player has played his role to perfection. They have responded well and capitalised on the chances which came their way. We have the good team composition this year and much can be expected from us,” Yagnik insisted.