Since a result would be highly improbable, first innings lead will become crucial under the circumstances.

Vineet Saxena (118) hit a fluent century as Rajasthan reached a solid 264 for two against Saurashtra on the second day of their Ranji Trophy group ‘B’ cricket match, here today.

The weather, which had allowed only four overs on first day, improved today and the hosts made full use of it by dominating the Saurasthra bowlers.

Resuming the day at the overnight score of four for no loss, Rajasthan lost Sidharth Saraf (24) to old warhorse Sidharth Trivedi when the total was 70 but Saxena and Robin Bisht (83) put in a solid second partnership of 149 runs to propel the hosts towards big score.

Saxena, one of the most consistent scorers in domestic cricket in the past few years, played solid as ever to race to his 14th first class hundred.

He scored 118 runs off 241 balls and hit 14 boundaries in his impressive innings before he was found plumb in front by Chirag Jani in the last session of the day.

Bisht, who is closing in on his second successive ton, has faced 177 balls so far and punished the visiting bowlers with nine shots to the fence. Giving him company at the crease was 24-year-old Ashok Menaria (25).

Since a result would be highly improbable, first innings lead will become crucial under the circumstances. 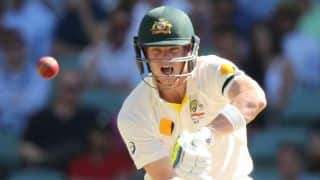