There is a massive tug-of-war raging among powerful lobbies inside the BCCI regarding the IPL verdict.

Both franchises, Chennai Super Kings (CSK) and Rajasthan Royals (RR) will be keenly waiting for the result of the Indian Premier League (IPL) governing council meeting, which will get underway shortly. However, to their huge disappointment, the management and the players will have to wait a little since because the IPL chairman, Rajeev Shukla, who is expected to head the discussion, has revealed that no final decision regarding the future of CSK and RR will be taken at the end of the meeting today. READ: Shashank Manohar blames N Srinivasan for IPL mess; Asks him to step down as ICC chairman

According to a report from the Times of India, the members of the Governing Council are not at consensus regarding the verdict against CSK and RR as there is a massive tug-of-war raging among powerful lobbies inside the Board of Control for Cricket in India (BCCI).

The clause 11.3 in the IPL franchise contract makes a provision for the termination of CSK and RR. And a group of senior BCCI officials strongly support that. Meanwhile, other officials believe that the two-year suspension imposed on the franchises is a strong punishment since the termination will be harmful to ‘brand IPL’ and unfair on CSK and RR, who have both put in an eight-year investment into the tournament.

CSK, that included stars such as Mahendra Singh Dhoni and Brendon McCullum and Rahul Dravid-managed RR faced a two-year suspension after for their involvement in betting and bringing the IPL and the game into disrepute was proved by the Justice Lodha committee. 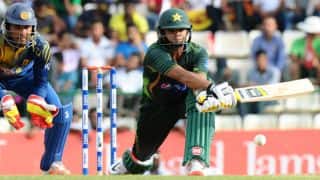 Azhar Ali scores 1,000 ODI runs, Pakistan off to a steady start against Sri Lanka in the 3rd ODI at Colombo