Rajneesh Gurbani is having a memorable season for Vidarbha in Ranji Trophy 2017-18. After destroying Karnataka in the semi-final, Gurbani set his eyes on Delhi. He claimed his first hat-trick to down Delhi s hope of a big score. Overall, he became the 76th player to achieve this feat in Ranji Trophy the previous player to do so was Karnataka’s Vinay Kumar.

Gurbani’s last 4 wickets came in 7 balls, including the hat-trick. It should also be noted that all his hat-trick victims were bowled comprising Vikas Mishra, Navdeep Saini and Dhruv Shorey. Gurbani finished with 6 for 59 to close Delhi’s first innings on 295. Kulwant Khejroliya, Rishabh Pant and Himmat Singh were Gurbani’s other wickets.

With this, Gurbani also became the second bowler to claim a hat-trick in a Ranji Trophy final. First player to achieve this feat was Tamil Nadu’s B Kalyanasundaram who had claimed it against Bombay in 1972-73 final.

This was also his third fifth-wicket haul in a row and fifth in seven innings. The previous Vidarbha player to pick a hat-trick in Ranji Trophy was Umesh Yadav, against Rajasthan in the 2015-16 edition. 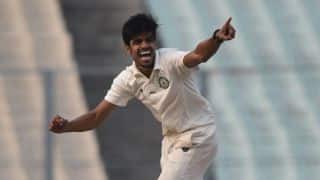