Sybrand Engelbrecht made 56 for Cobras.

Sybrand Engelbrecht and Stiaan van Zyl‘s calculated pyrotechnics helped Cobras to give Dolphins a run for their money before losing by a margin of two runs in Ram Slam Twenty20 (T20) final at Cape Town. Engelbrechit notched up his fifty with a fine boundary. He was particularly severe off Daryn Smit’s bowling by playing shots down the ground.

On the other hand, Van Zyl took his time to settle down before he essayed a few fine strokes of his own. It was great direct hit by Roby Frylinck that ended the fine partnership that was stitched by both batsmen with Van Zyl losing his wicket. The final nail in the coffin for Cobras came when Engelbrecht got out for 56 off a mere 39 balls. Justin Kemp who was batting at the other end and known for playing sparkling shots just couldn’t get going when needed for Cobras. He did hit a few shots in the last over but it was too little too late.

The tall seamer Kyle Abbott who had extracted venomous seam movement came back into the attack and checked the run flow by bowling back of a length stuff. He generally tended to bring the ball into the right-handed batsmen and gave no width for batsmen to free their arms. Others too, especially Mthokozisi Shezi bowled to their plans on a dry wicket to help them win the coveted trophy.

Earlier, Dolphins ended up with 146 for eight. Morne Van Wyk essayed a fie knock of 47. David Miller looked set to get a fine score but just in nick of time, Cobras got him out for a well made 25. Yet, 146 for eight looked like a challenging total on the board on a rather difficult track for batting.  In the end, the score proved to be too much for Cobras to chase down. 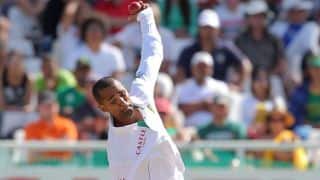 Danny Morrison: One of the finest speedsters in New Zealand history