Rangana Herath bowled 39 overs of his left-arm spin in the second Test in Nagpur that ended with India thrashing Sri Lanka by an innings and 239 runs.

Sri Lanka have lost key spinner Rangana Herath for the crucial third Test against India starting Saturday because of recurrent back problems. The tourists on Tuesday called up Jeffrey Vandersay to replace the 39-year-old for the New Delhi Test, which Sri Lanka must win to avoid another series defeat.

“We have recalled Herath and he will return immediately as we decided to rest him”, selectors’ chairman Graeme Labrooy told reporters. “Herath will be replaced by Jeffrey Vandersay , Labrooy added.

The veteran Herath bowled 39 overs of his left-arm spin in the second Test in Nagpur that ended with India thrashing the visitors by an innings and 239 runs.

“Rangana complained of stiffness in his back during the match. This happens to him whenever he tries to bowl a little faster,” said team manager Asanka Gurusinha.

Herath had to be rested during Sri Lanka’s home series against India this year with the same problem. Sri Lanka lost all nine Tests, one day games and T20 matches in that series.

Vandersay has played 11 one-day internationals and seven Twenty20 matches for Sri Lanka but has yet to make his Test debut. Sri Lanka trail the series 1-0 after the first rain-hit Test in Kolkata ended in a draw. 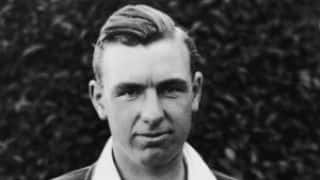