Rangana Hearath picked a 11-for as Sri Lanka clinched the Abu Dhabi Test against Pakistan by 21 runs to go up 1-0 in the 2-Test series.

Rangana Herath picked a 11-for as Sri Lanka clinched the Abu Dhabi Test against Pakistan by 21 runs to go up 1-0 in the 2-Test series. The thrilling defeat marked Pakistan’s first loss in a Test at Abu Dhabi. Herath, at 39-and-half, registered his 100th wicket against Pakistan and became the first to do so. He also completed 400 Test scalps.

Herath and Yasir Shah are two of the finest spinners of the modern game. No one thought it would be Yasir s batting against Herath s bowling that will decide the fate of the Test. Yasir looked to play Herath down the leg-side, Nirsohan Dickwella collected it cleanly and burst out in a loud appeal. Nigel Llong said not out but a convinced Dickwella went for a review. Sri Lanka lost it. There was no bat. Five balls later, Mohammad Aamer steps down the ground and piles more agony with a boundary.

Pakistan then needed 27 with 2 wickets in hand. Herath is not one to give up. In the next over, Herath baits Aamer and beats him with the dip and the leather finds the stumps. Next over, Yasir gets a bat-pad, umpire signals out . But Dilruwan Perera had overstepped. The drama intensified. It s unfortunate that one of the finest Tests in recent times had to be hosted amidst empty stands in Abu Dhabi.

Sri Lanka finally had the last laugh in the next over. Herath trapped Mohammad Abbas lbw and the Sri Lankan team burst into celebrations. Abbas did go for a review, but was more of a formality. In this way, Herath also became the oldest bowler to take 400 wickets. In addition, he also becomes the most successful left arm spinner with so many Test scalps.

Sri Lanka can now certainly move on from the India debacle received at home, and will look to seal the series in the second Test in Dubai. In pursuit of 136, Pakistan crumbled against the Sri Lankan spin duo: Herath and Perera. Only Asad Shafiq, Haris Sohail and Sarfraz Ahmed registered double figures as the whole batting unit fell apart.

Pakistan had their chances to win the Test after a spirited 3-run lead and 5-for from Yasir in the second innings. Batting first, Sri Lanka made 419 courtesy Dinesh Chandimal’s 155. In reply, Pakistan fought hard to reach 422 with fifties from Sami Aslam, Shan Masood, Azhar Ali and Sohail. It looked like the match would be heading towards a tame draw, but Yasir evoked a massive turnaround.

Yasir removed Chandimal, and later ran through Sri Lanka’s lower order on a pitch conducive for spinners (but not unplayable as well). As a result, Sri Lanka folded for 138. Nonetheless, even a paltry total of 136 proved to be difficult for Pakistan due to Herath’s presence.

The Test match had everything apart from a good turnaround. A fuming Pakistan side will be eager to level the series in the second Test from October 6.

– Herath is the third fastest to 400 Test scalps. He took 84 Tests, compared to Muttiah Muralitharan’s 72.

– This is also Sri Lanka’s smallest margin of win.

– Herath now has 3rd most 10-fors (9) after Murali and Shane Warne. He is tied with Richard Hadlee.

Herath: I have no idea, but I have played more games against them (on taking 100 wickets against Pakistan). When you are getting old, it gets increasingly difficult, it’s a different feeling (on his 400 Test wickets). Remarkable achievement, all the credit goes to my parents, family, the team and the management. I don’t have any pressure, just play my game. There was some assistance from the surface, there was something for the spinners and it helped me.

Chandimal: We are over the moon, we have waited for this win. Credit goes to all the guys, lots of hard work before this Test. Credit should also go to the management and the selectors. It’s difficult in the middle, Dickwella and Karunaratne were very good in the first innings, Dickwella was unbelievable in the second innings to get us to the 140-run mark. As soon as we got there, we knew Rangana would lead us in the defence of the target. On a personal front, I am very happy with the way I batted in the first innings.

Sarfraz: Win and loss – it’s always a part of the game, but we should have won this match. There are some batting issues in our team and we were put under pressure. Needed one partnership and the game was ours. There was a bit of bite and turn with the new ball, that was one of the reasons for us losing so many wickets. Haris had a wonderful debut, hopefully, he will continue to perform well for us. Need to comeback well in the second Test, the batsmen must pull-up their socks and deliver. 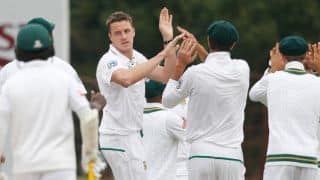