Assam ended Day three on 30 for one, still needing 354 runs for a historical victory against current champions Karnataka in their opening Group A Ranji Trophy 2015-16 match in Guwahati. Chasing Karnataka’s lead of 384 in the second innings, Assam lost their opener Sibsankar Roy on the last delivery of the day. Suchith J, who had a disappointing first innings where he had managed just one wicket, struck early in the second innings removing Roy for a 30-ball eight. The inexperienced Assam will aim for a draw tomorrow, which is the last day of the match for a reason that it is unlikely for an for them to go pass the side that features the likes of Vinay Kumar, Karun Nair, CM Gautam and Robin Uthappa. Live Cricket Score, Assam vs Karnataka, Ranji Trophy 2015-16, Group A match, Day 3 at Guwahati: At stumps, ASS need 354 runs to win

Earlier in the day, Samarth R’s ton was followed by vital contributions from the middle-order batsmen that gave Karnataka the strong lead. After the dismissal of the openers, Shishir Bhavane, Karun Nair, C M Gautam and Shreyas Gopal took charge of Karnataka’s innings as they scored 40, 34, 44 and 41 respectively.

Meanwhile, across India, Tamil Nadu won a thriller against Baroda by seven runs, thanks to Rahil Shah’s five-wicket haul towards the end of the innings. The other exciting end happened in Saurashtra where Ravindra Jadeja’s five-wicket haul in the second innings and an overall of 11 wickets helped Saurashtra win by an innings and 18 runs in the Group C match of the ongoing Ranji Trophy 2015-16 on Day three. Tripura were bundled out for a mere total of 86 on Day three after they were enforced follow-on on the second day for getting all-out for 103 in reply to the home side’s first innings’ total of 307. 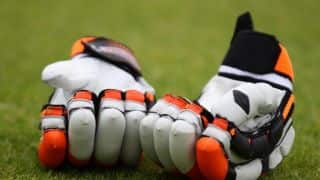