After Jiwanjot Singh and Mayank Sidhana, it was turn of Punjab's wicketkeeper-batsman Uday Kaul to add insult to Bengal's injury with a fine 165 not out as home team piled up a massive 579 for seven declared with an eye on another outright win with bonus points. 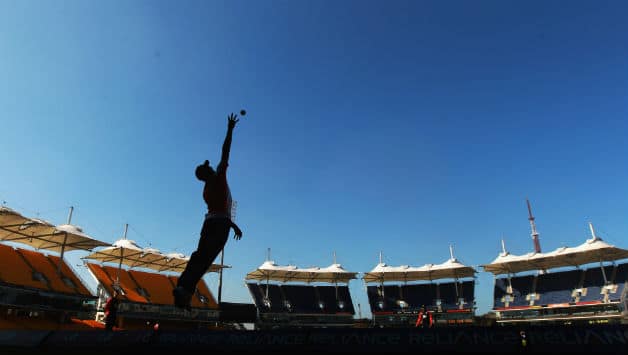 After Jiwanjot Singh and Mayank Sidhana, it was turn of Punjab’s wicketkeeper-batsman Uday Kaul to add insult to Bengal’s injury with a fine 165 not out as home team piled up a massive 579 for seven declared with an eye on another outright win with bonus points.

Trailing by 253 runs, Bengal were in a spot of bother as they ended third day’s play at 25 for one with experienced opener Subhamoy Das already back in the pavilion. They still need to score 229 runs to avoid innings defeat.

If the match is divided into nine sessions over three days, Bengal have been thrashed in eight of them and that is what precisely has been the reason for this disastrous show.

First it was Jiwanjot (158) and Sidhana (115) who dominated the Bengal bowling with a 224-run second wicket partnership. While Sidhana’s 194 ball innings had 19 boundaries, Jiwanjot, who is going through dream phase, hit 158 from 288 balls with 17 fours and was when Punjab’s score had reached 331.

Left-hander Uday took over from Jiwanjot as he played 236 balls hitting 24 boundaries. He had two identical partnerships of 103 each with Amitoze Singh (52) and Bipul Sharma (39).

The Bengal bowlers again failed to bowl according to field placement. The worst offender was Ashok Dinda who gave away 107 runs in his 33 overs. Bengal’s seniormost bowler had a lot of responsibility but his performance was far from what one expects from a man who is national reckoning.

Sourav Sarkar’s one-dimensional bowling getting the ball back into the right-handers became predictable while Veer Pratap’s inexperience at this level showed.

Skipper Manoj Tiwary tried his leg-breaks and was partially successful in removing centurion Jiwanjot but also got punished for bowling lot of boundary balls.

It will now be upto the Bengal skipper and his mates to see off the 90 overs on the final day which will atleast give Bengal a point and save them from the ignominy of a humiliating defeat.