Gautam Gambhir's Delhi shot out as Punjab for 74.

Delhi captain Gautam Gambhir‘s dogged insistence of playing on a seaming track was vindicated once again as the hosts bowled out Punjab for just 74 runs in on a fog-hit first day of the Ranji Trophy group A encounter here today.

At stumps, Delhi were 46 for two with Unmukt Chand batting on 21 and veteran Mithun Manhas on six on a day when only 42.4 overs of play was possible at the Roshanara Club ground.

Delhi skipper Gambhir won the toss and put Punjab into bat as the slide started from the third over itself as Ashish Nehra again showed that he is force to reckon with in overcast conditions and the pitch having a lot of juice in it.

The pitch and the conditions once again proved that domestic batsmen are inept when it comes to slogging it out in trying conditions.

Yuvraj Singh (0) might have got a debatable leg before decision when he had plonked his front-foot forward by a fair distance but most of the other batsmen looked incapable of handling the controlled seam bowling from Nehra.

Nehra grabbed four for 31 while Parvinder Awana (3 for 20) and Rajat Bhatia (2 for 4) produced wickets at regular intervals to reduce Punjab to 35 for nine at one stage. It was Manpreet Gony who used his long handle to a good effect smashing 29 off 24 balls with five boundaries as Punjab managed to cross 50 in the end.

“We always knew what the conditions were and we can’t give any excuses for scoring 74 runs. It’s not acceptable whether you are playing for Punjab or any other team. But we still have hope that we can make a comeback otherwise there would be no point in the contest,” the former swing bowler said.

It was Sumit Narwal, who started the slide by inducing an edge off Jiwanjot Singh (4)’s bat that was taken by Vaibhav Rawal in the slip cordon. Nehra then got into the act as Uday Kaul (2) nicked one to Rahul Yadav behind stumps.

Sandeep Sharma, who normally bats at No 11 for his state side was sent at No 4 ahead of Yuvraj but he was taken at mid-on by Awana off Rajat Babita’s bowling. Two balls later, Yuvraj tried playing a forward defensive prod and umpire adjudged him leg before. The batsman was unhappy as he showed that the ball has hit his bat before leaving.

At 16 for four, Punjab were in trouble before Manan Vohra (16), who looked solid played a pull-shot which went up and bowler Awana took the catch. It became 32 for six when keeper Yadav took a brilliant diving catch off Awana to remove Gurkeerat Singh (0).

Nehra was on a hat-trick when he cleaned up Mandeep Singh (11) and Jaskaran Singh (0) off successive deliveries but Siddharth Kaul averted the hat-trick. Nehra got his fourth victim when Gitansh Khera (1) edged one to give Yadav his third catch.

At 35 for nine, Gony and Kaul put some fight but that certainly won’t be enough as Delhi will be aiming for another seven points. 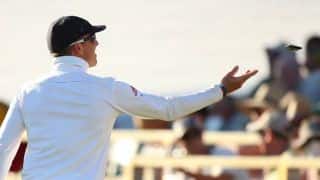