Maharashtra have scored 109 runs in the afternoon session against Karnataka.

Maharashtra fought back in the afternoon session of the Ranji Trophy 2013-14 final against Karnataka at Hyderabad. Karnataka were bowled out for 515, which gave them a 210-run lead. Maharashtra are currently only 46 runs behind, having amassed 163 runs in a little over a session.

The session began on a disastrous note for Maharashtra as Vijay Zol was dismissed off the very first ball of the session. R Vinay Kumar came from round the wicket and had Zol poking at one outside the off-stump. At 54 for two, Maharashtra were in a huge spot.

But, Bawne and Jadhav came together and stitched together a remarkable partnership. While Bawne was more solid, Jadhav was attacking from the outset.

There was some remarkable batting on show as the duo made batting look quite easy. Bawne moved to his fifty quite easily. The only scares came when Jadhav charged to the fast bowlers a few times and missed.

But, it was quite bizarre to see Karnataka spread their field out. At one stage they had as many as five fielders on the boundary. It was a team that was seemingly in control, but Jadhav put them on the back foot. He sped away to his fifty off only 59 balls and the 100 partnership came off only 133 balls.

Maharashtra have scored 109 runs in the afternoon and that should buoy them as they head into the final session. 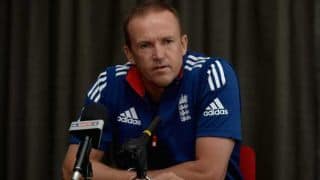