Karnataka are the clear favourites as they have a huge first innings lead.

Kedar Jadhav lit up the Ranji Trophy 2013-14 final with a century as Maharashtra fought back against Karnataka on Day Four. Earlier in the day, Karnataka finished their innings at 515, with a 210-run lead. In reply, it was Jadhav’s turn to shine as his ton surged Maharashtra past the Karnataka lead.

Yet, one would say that Karnataka are the clear favourites as they have a huge first innings lead and if anyone has to force the issue, it is Maharashtra. The chances are bleak though as Jadhav was dismissed late in the day.

Starting the day on 474 for four, Karnataka lost Shreyas Gopal early to Anupam Sanklecha. R Vinay Kumar and Abhimanyu Mithun wielded their willow and propelled Karnataka past 500. Thus, when Maharashtra started their innings, the pressure was entirely on them and they made a change as the attacking Vijay Zol opened the batting with Harshad Khadiwale.

Khadiwale looked in decent touch and got to 1,000 runs in the season, becoming the third man to do it this year. Zol, meanwhile, continued to attack, flirting with danger around mid-off. A few uppish strokes went over the fielder by a whisker. Zol continued to try his luck and Maharashtra went into lunch at 54 for one.

After lunch, Zol was dismissed off the very first ball as he edged to the wicketkeeper to Vinay Kumar, who came from round the wicket.

But, Bawne and Jadhav came together and stitched together a remarkable partnership. While Bawne was more solid, Jadhav was attacking from the outset.

There was some remarkable batting on show as the duo made batting look quite easy. Bawne moved to his fifty quite easily. The only scares came when Jadhav charged to the fast bowlers a few times and missed.

But, it was quite bizarre to see Karnataka spread their field out. At one stage they had as many as five fielders on the boundary. It was a team that was seemingly in control, but Jadhav put them on the back foot. He sped away to his fifty off only 59 balls and the 100 partnership came off only 133 balls.

Maharashtra scored 110 runs in the afternoon and that should buoy them as they head into the final session.

Bawne was dismissed trying to dance down the wicket and was stumped off Gopal. Sangram Atitkar too did not last long as he tried to sweep Gopal and got a top edge that was taken at short fine-leg.

That did not stop Jadhav though, who has now constructed a fighting stand with Chirag Khurana.

Jadhav attacked, trying to play audacious strokes and got to his ton. Khurana and Jadhav threatened to take Maharashtra to the end of play without further losses, but then Vinay Kumar struck with full tosses.

Bowling with a shortened run-up, he bowled a near waist high full toss to Khurana who only got an edge to the cover. Jadhav then played a full toss straight down cover’s throat near the end of day’s play.

That should be the end of Maharashtra’s fight and it would be a matter of time on Day Five. 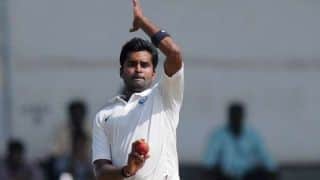