KL Rahul’s ton has continued to build Karnataka’s challenge in the Ranji Trophy 2013-14 final against Maharashtra at Hyderabad. Rahul was unbeaten on 94 overnight and got to his ton early on Day Three. Karnataka are gradually inching towards Maharashtra’s score.

Maharashtra started the session very well as Ganesh Satish was dismissed in the first over. Chirag Khurana started off the proceedings and got one to turn into Ganesh, who was rooted to the crease. The ball beat him and clattered into the stumps. At the end of Day Two, Ganesh had spoken about the turn Khurana was getting from outside off and that is what did him in.

Meanwhile, Rahul moved towards his ton as Robin Uthappa walked back to the middle to resume his innings. Rahul took a few singles and then, on 97, he swept Khurana through square-leg for a four to get to his fourth First-Class century.

There was a genuine intent to attack the spinners from both ends. Once Rahul got to his ton, he charged to Akshay Darekar and smashed him inside out over long-off for a maximum.

Uthappa was his usual attacking self and flicked with ease. He even dispatched Khurana over long on for six. Maharashtra opted for the new ball in the 81st over and got their pacers in business. Anupam Sanklecha had Robin Uthappa play a false stroke as he cut it between first and second-slip. Kedar Jadhav got his hands around after the ball had passed him. That was the sixth catch Maharashtra dropped in the innings. 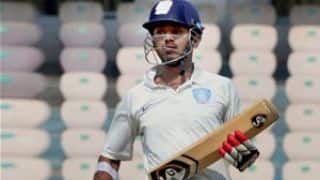 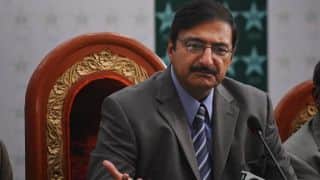