Karnataka have taken a stronghold of proceedings in the Ranji Trophy 2013-14 final against Maharashtra at the Rajiv Gandhi International Stadium, Hyderabad.

Earlier in the day, Karnataka’s seamers bowled Maharashtra out for 305. Robin Uthappa was retired hurt early in the Karnataka innings, but Lokesh Rahul and Ganesh Sathish have played well since then.

It has been easy going since lunch and both batsmen seem to be untroubled. The sun is beating down on the surface and the moisture seems to have dried out. The scoring rate may not have been very quick, but there is no denying the fact that Karnataka are in a strong position.

Rahul has been a delight to watch. He has essayed numerous cover-drives, although he hasn’t fetched too many boundaries. Sathish has done majority of the scoring and has tried to pierce the gap behind point and has done quite well. The Maharashtra seamers aren’t getting help from the surface.

Maharashtra have brought the left-arm spinner Akshay Darekar into the attack. The pitch is expected to crack and there is supposed to be some turn. But, it is unlikely to happen so early in the game.

With this partnership, Karnataka are striding forward and Maharashtra need some inspiration to strike back. At the drinks break in the afternoon session, Maharashtra are 85 for no loss. 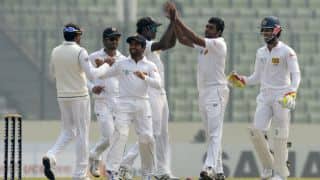