Riding on Paras Dogra's double century and a hundred from Bipul Sharma, Himachal Pradesh posted 558 for five declared before enforcing a follow-on on Goa in their Ranji Trophy Group C match in Dharamsala on Tuesday. 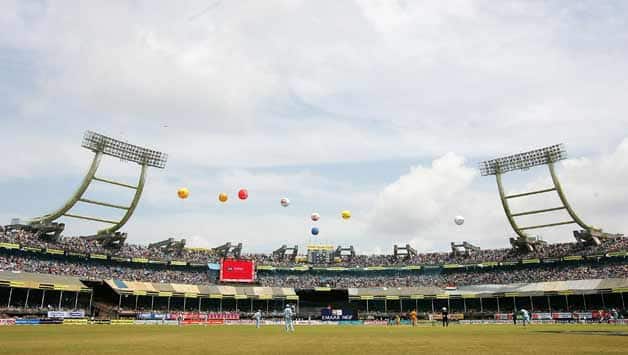 Riding on Paras Dogra‘s double century and a hundred from Bipul Sharma, Himachal Pradesh posted 558 for five declared before enforcing a follow-on on Goa in their Ranji Trophy Group C match in Dharamsala on Tuesday.

Replying to HP’s massive total, Goa were all out for 243 in their first innings before finishing the day on 38 for no loss in the second essay while following on.

Goa require 277 more runs with 10 wickets in hands to avoid an innings defeat.

HP resumed the day on 543 for five with overnight double centurion Dogra and Bipul at the crease.

While Bipul, resuming on 86, completed his century, Dogra added just one run to his overnight score of 208 to remain unbeaten on 209 before the hosts decided to declare the innings.

The duo put on an unbeaten 147-run stand for the sixth wicket.

In reply, Goa got off to a disastrous start, losing two wickets for just six runs on the board.

Opener Rohan Belekar (54) and skipper Ravikant Shukla (79) steadied the boat by sharing a solid 117-run partnership for the third wicket, but once the former was out, Goa could hardly make a comeback.

While Shukla’s innings came off 143 balls, studded with 11 fours, Belekar took 117 balls for his knock, laced with 11 hits to the fence.

Only other Odisha batsmen who could reach a double-digit mark were Shadab Jakati (52) and Keenan Vaz (21), even as Rishi Dhawan chipped in with five wickets for 68 runs.

Following-on, Goa made sure that they did not lose any wicket by the end of the third day’s play and both the openers, Amogh Sunil Desai and Swapnil Asnodkar remained unbeaten on 26 and nine, respectively.

India vs Australia 2013 Preview: Hosts in search of win at Nagpur to stay alive in series