Opener Jiwanjot Singh smashed an unbeaten century to help Punjab produce a much-improved batting show and score 330 for one in their second innings against Vidarbha at stumps on Day 3 of the Ranji Trophy Group C match, which is heading towards a dull draw, here today.

Jiwanjot struck as many as 25 boundaries to bring up his 188 off just 200 deliveries.

At the close of play, wicket-keeper Uday Kaul was giving him company on 88 which came off 169 balls and was studded with four boundaries.

Manan Vohra was the only Punjab wicket to fall as he was run out on 52.

Punjab, thus, took an overall lead of 154 runs over Vidarbha but with just a day’s play remaining the game seems to be heading towards a draw.

Earlier resuming at the overnight score of 332 for seven, Vidarbha added just 28 runs to their score before being bowled out for 360 in their first innings in reply to Punjab’s 184.

Sandeep Sharma was pick of the bowlers for Punjab with  figures of five for 90 while VRV Singh took four wickets giving away 89 runs.

If the match ends in a draw, Vidarbha would take home three points from the virtue of 176 runs first innings lead, while Punjab had to be content with just one point. 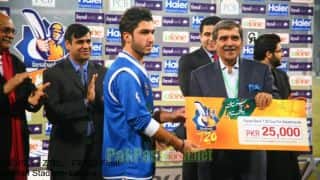 Ranji Trophy 2013-14: Jharkhand in commanding position against Mumbai at the end of Day three