Sachin Tendulkar walked out to bat to a rousing reception by the crowd that had gathered to witness the Ranji Trophy 2013-14 clash between Haryana and Mumbai at Lahili. 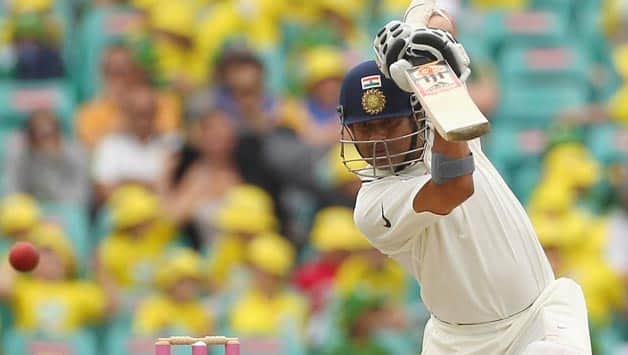 Sachin Tendulkar walked out to bat to a rousing reception by the crowd that had gathered to witness the Ranji Trophy 2013-14 clash between Haryana and Mumbai at Lahili on Sunday.

The buzz around the match and the small town in Haryana was over the presence of the batting maestro who didn’t fail to entertain the crowd as he hit a straight drive past the bowler for a boundary.

Mumbai made a cautious start to their innings as they reached 36 for two at tea on day One after bowling out hosts Haryana for 134 in the first session itself.

Earlier in the day, Mumbai pacers Zaheer Khan, Dhawal Kulkarni, Javed Khan and Abhishek Nayar ran through the Haryana batting on a green pitch which had enough juice in it to keep the batsmen at bay. Under such tough circumstances even the Haryana batsmen didn’t apply themselves which is evident from the scorecard as Mohit Sharma was the highest scorer.

The shot of the innings was played by Mohit who hit a sweetly timed off-drive which took Haryana past the three figure mark.

There was not much doubt that the team winning the toss will be keen to bowl on the fresh wicket and Mumbai skipper Zaheer was the lucky one, choosing to field. The skipper started the proceedings and it didn’t take much time to bag the first wicket. Nitin Saini and Rahul Dewan went for a needless second run and Saini was run-out for three.

That run-out opened the floodgates as Haryana kept losing wickets. Zaheer and Kulkarni were soon among the wickets with Sunny Singh and Rahul Dewan walking back. The fall of third wicket got the veteran Ajay Jadeja on the crease. Along with Abhimanyu Khod he added a few runs. Both the batsmen were watchful avoiding rash shots. Unfortunately even the sweetly-timed shots didn’t run to the boundary due to a moist outfield. However, Jadeja was out for 14 after he couldn’t judge the angle of an incoming delivery from Javed and was caught in the slips. Hiken Shah was kept busy in that fielding position taking most of the catches that flew there.

After Jadeja, Sachin Rana (2) was bowled by Nayar. The all-rounder with his medium pace made further inroads bagging more wickets. Finally the well-set Khod was out for 27 from 41 balls. He went for a cover drive and couldn’t time it from the meat of the bat and the ball flew to Kulkarni at backward point giving Javed Khan his second wicket.

They were floored to 71 for eight before Mohit Sharma went after the bowling to accumulate valuable runs. He slashed and went for his drives fearlessly which frustrated the bowlers and delayed the lunch break. Ashish Hooda, the No 11 batsman provided ample support to Mohit to keep the scoreboard moving. Even the odd edges fell short of the slip fielders . Zaheer finally opted for spin for the first time bringing in Vishal Dhabolkar who dismissed Mohit leg-before for 49.

The last two wickets added 63 runs with 37 of it coming from the last pair.