Defending champions Mumbai were shockingly shown the door by minnows Maharashtra, who showed tremendous resilience to record a come-from-behind eight-wicket victory here today for a place in the Ranji Trophy semi-finals.

Set a target of 252 to chase for only their third outright victory in the long-running competition over the 40-time winners, Maharashtra rode on an unbeaten century from Kedar Jadhav (120 not out) and his superb 215-run unconquered third-wicket stand with 19-year-old Vijay Zol (91 not out) to turn the tables on the home team on the fourth day of the five-day match.

Jadhav, who made 51 in the first innings and also crossed 1000 runs for the season during this excellent knock, faced 144 balls and hit 14 fours and three sixes in his 239-minute knock. It was the latter’s fifth century of the season and ninth in his first-class career since debuting in 2007-08.

Maharashtra would meet the winners of the other quarter-final between Bengal and Railways in the semi-finals scheduled at Indore’s Holkar Stadium from January 18-22.

Zol and Jadhav started cautiously after joining forces at the fall of the second wicket with 37 on board before opening out to totally dominate the hosts’ attack.

Mumbai’s Kaustubh Pawar dropped Zol at cover point off Abhishek Nayar, in the latter’s first over, when the left-handed youngster was at just three in a score of 43 for 2.

This was an extremely costly lapse as Zol grew from strength to strength in the company of Jadav, who was in the squad that had previously defeated Mumbai in the 2005-06 season at this very Wankhede Stadium. The duo paved the way for Maharshtra’s memorable victory and their first entry into the last four after 17 years.

The last time Maharashtra, who topped Group C in the league, had reached the semis was in 1996. They had beaten Mumbai outright one other time earlier in 1952-53.

It was a great come-from-behind win too for Maharashtra as they had conceded a vital first innings lead of 122 runs to Mumbai before storming their way back into the game yesterday when their pace trio of Anupam Sanklecha, Samad Fallah and Shrikant Mundhe bundled out the home team for a paltry 129 in the second innings.

Still a target of 252 on the bouncy Mumbai track against the Mumbai attack led by India’s pace spearhead Zaheer Khan looked a formidable task especially after the left-arm bowler had dismissed Khurana cheaply yesterday and the league’s top scorer Harshad Khadiwale with a snorter early today.

Resuming at 28 for one and needing 224 more to upstage the holders, Maharashtra were rocked on the back foot early this morning by Zaheer when he forced Khadiwale to fend at a short one from round the wicket and the ballooning catch was easily held by Pawar in the slip cordon.

But the same fielder dropped a simple chance, and an important one at that, a while later off Nayar. And Zol prospered in Jadhav’s company on a wicket that eased out as the day progressed.

Mumbai captain Zaheer Khan tried to shuffle his medium pacers around, and bowled four short spells himself to effect the breakthrough but failed.

Left-arm spinners Vishal Dabholkar and Iqbal Abdulla, who was the bowling hero in the holders’ come from behind victory over Gujarat in their do or die last league match earlier with a 11-wicket haul at Valsad, were also ineffective on the seam-friendly track.

In fact, so ineffective was Dabholkar, the team’s highest wicket-taker in the league, that Jadhav slammed him for three sixes in one over — two off successive balls over the straight field — to raise the 150 of the stand.

Zol had earlier cracked Zaheer for successive fours on the on-side before lunch to raise the 100 of the innings.

After lunch, taken when Mumbai were 111 for two, Jadhav banished Nayar off the attack by hitting him for two fours in the first over.

This set the tone for both batsmen to take the Mumbai attack by the scruff and hasten their side’s victory surge.

Jadhav completed his well-deserved ton off only 124 balls laced with 3 sixes and 11 fours before he and his younger partner sealed a memorable victory for Maharashtra. Eoin Morgan believes England can bounce back from Ashes humiliation 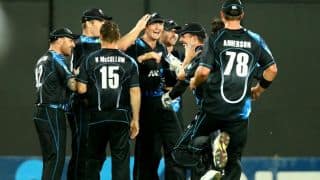