Opener Adil Rishi scored a half-century after Beigh's five for.

Opener Adil Rishi led Jammu and Kashmir to a good start in their first innings after pacer Samiullah Beigh captured five wickets to bowl out Tripura for 280 in their Ranji Trophy Group C match.

Rishi was 50 not out at the end of second day’s play as J&K were 117 for three at Tripura Institute of Technology ground here.

Resuming from a solid 176 for three, Tripura were dealt early blows as they lost overnight batsmen Yogesh Takawale and Syed Abbas Ali in the space of eight runs.

Skipper Takawale (83) could only add a run to his overnight score before medium pacer Ram Dayal cleaned him up, while Abbas Ali (58) fell prey to Mohammad Mudhasir after completing his half century that included six fours and a six.

Takawale smashed 14 boundaries and a maximum in his 153-ball knock.

Abhijit Dey’s knock of 51 was instrumental in taking Tripura a decent total in their first innings as wickets fell at the other end, and his eventually folded at 280.

Beigh (5 for 80) bagged his sixth five-wicket haul in First-class cricket.

J&K openers Adil and Obaid Haroon added a quick 52 runs for the first wicket. But Tripura bowlers claimed three wickets to share the honours before the close of play.

Rana Dutta, Tushar Saha and Sanjay Majumder picked a wicket each for the hosts. 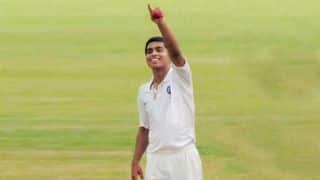