Saurashtra crushed a hapless Services by nine wickets on second day of their Ranji Trophy Group B final league match, but the win may not be enough for them to remain in contention for a berth in the knockout stage.

Saurashtra needed not just an outright victory but also a bonus point to keep their chances of making the quarterfinals alive. But the hosts missed out on gaining a bonus point as they lost opener Chirag Pathak (14) while chasing 31 run for victory.

A fighting knock of 85 by Anshul Gupta of Services went in vain as Saurashtra finished the four-day match on the second day itself at the Saurashtra Cricket Association (SCA) Stadium at Khandheri.

With this win, the last year’s finalist finished the Ranji season on 22 points from eight matches.

Earlier resuming on 176 for nine in their first innings, Saurashtra could add just one run to their overnight score before being all out for 177.

But that was enough for them to take a healthy 105-run lead over Services, who were bundled out a a mere 72 in their first essay. For Services, Yashpal Singh grabbed five for 41, while Rajat Paliwal accounted for four for 22.

The visitors, in their second innings also, continued their lacklustre performance as they got bundled out for just 135, thereby setting Saurashtra a target of 31 runs.

Anshul Gupta was the only batsman to offer some resistance as he stood tall among the ruins. His gritty 122-ball knock was punctuated with eight fours and a six. His effort helped the Services cross the three-figure mark.

Yashpal Singh (11) was the only other batsman to reach the double-digit mark, while the rest of Services players seemed in a hurry to go back to the hut.

For Saurashtra, Nayan Doshi was the pick of the bowlers with figures of four for 31, while Kamlesh Makwana and Dharmendra Jadeja finished with three wickets each, giving away 48 and 50 runs, respectively. 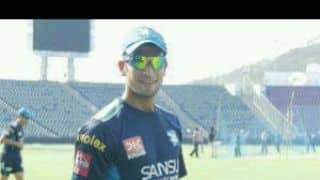