Karnataka have stretched their lead to 147 and have moved to 417 for five in their Ranji Trophy 2013-14 semi-final against Punjab at Mohali.

Karun Nair has been going strong after scoring a ton and Amit Verma has also completed his century. Then, the umpires took the players off the field due to bad light.

Karnataka started the day slowly as there were overcast conditions and they were trying to see off a testing period. However, once both batsmen settled in, they were more fluent and Verma gradually moved to his ton.

However, the umpires later called bad light as it only became more overcast. 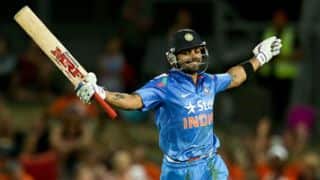