Sunny Singh‘s unbeaten century propelled Haryana to 266 for two against Gujarat on the opening day of their Group ‘A’ Ranji Trophy match, here, on Saturday.

Sunny’s unconquered 139-run knock was rife with 19 fours and two sixes as he reduced the host bowlers to a mere spectator at the Sardar Patel Stadium, Motera.

Having elected to bat, Haryana lost only two wickets before stumps with Sachin Rana (51 batting) giving company to Sunny.

Sunny was also involved in two key partnerships with opener Rahul Dewan and Rana. He first stitched a 173-run partnership for the second wicket with Dewan, who scored a cautious 162-ball 68, and then went on to add an unbeaten 91 with Rana.

Haryana got off to a poor start when Avi Barot’s (0) stay in the middle was cut short to just five balls by left-arm seamer, Rush Kalaria.

Next-man in, Rahul combined well with Sunny and struck a fine half-century. He ended up scoring 52 of his runs in boundaries.

After he was dismissed by medium pacer Janmit Bumrah, Rana made sure there was no further damage. 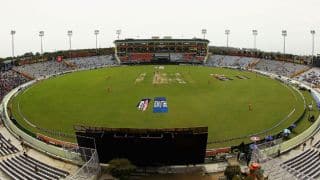