Fourteen wickets fell on Day Two of match between Tripura and Andhra Pradesh.

Andhra, however, failed to capitalise on that low score, and lost three quick wickets to stumble to 42 for 3. Bodapati Sumanth led the recovery with 55, but from 116 for three, the visitors collapsed and were bundled out for 163 to conceded a 16-run first innings lead to Tripura.

When Tripura batted for the second time, Andhra clawed their way back into the game with three early wickets, leaving the hosts at 20 for three at stumps. 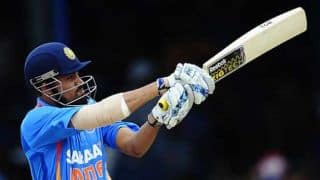