R Vinay Kumar and Abhimanyu Mithun put Karnataka on the verge of victory.

A rare century by skipper R Vinay Kumar followed by purposeful bowling led by Abhimanyu Mithun had Karnataka on the verge of victory over Punjab in their Group A Ranji Trophy match.

Mithun captured three for 26 from 11 overs, as Punjab in pursuit of 331 for avoiding an innings defeat, slumped to 156 for five in their secnod innings at stumps on the third day at KSCA Stadium.

Right-hander Gurkeerat Singh Mann was the only Punjab batsman who could negotiate the Karnataka bowlers, smashing the top score so far of 56 not out.

Vinay, who cracked his first first-class hundred, was undefeated on 105, as the hosts reached 505 for nine in their first innings before declaring their innings. The host captain struck 10 fours and a six from 183 balls in close to four hours batting.

Pacer Manpreet Gony was the most successful Punjab bowler with three for 98 from 31 overs.

Punjab’s second innings started badly as they lost three wickets when the score was just 35 on the board, the chief wrecker was Mithun bagging prized wickets of Mandeep Singh (12) and Uday Kaul (3).

Mithun once again struck in 27th over when Punjab’s mainstay batsman Jiwanjot Singh was trapped leg before wicket after he laboured for 32 runs in 62 balls with six hits to the fence.

Half an hour away from close of day, Taruwar Kohli laboured hard for his 30 runs after spending nearly two-and-a-half hours, facing 98 balls and nailing six boundaries. He was cleaned up by centurion Vinay, who finished with a figures of one for 25 off ten overs.

Earlier in the day, Vinay cracked his first century of his career in any form of the game. He knit a 67-run partnership for ninth wicket with KP Appanna, who made a quickfire 45 off 46 balls with eight boundaries to his name. 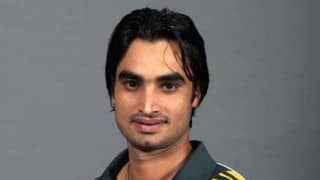