A gritty 84 from veteran Mithun Manhas and a late-flourish from tailender Navdeep Saini took Delhi to 353 all out against Odisha as inclement weather allowed just 35 overs of play on the second day of their Ranji Trophy Group B cricket match here today.

Resuming at overnight 248 for 5, Delhi added another 105 runs from 27.2 overs at the cost of losing five wickets as light rain and bad light affected the day’s play at the Feroze Shah Kotla here.

Delhi lost two quick wickets in the form of Puneet Bisht (3) and Shivam Sharma (0) before Manhas also fell as eighth batsmen dismissed at team total of 286.

It was then left to Varun Sood (27) and Saini (42 not out), the number nine and number 10 batsmen respectively, to stitch 67 runs for the ninth wicket and take the Delhi score past 350.

Manhas, who was on 55 overnight, added 29 more runs today, hitting seven fours and a six in his 205-ball innings of nearly five hours. Saini hit six boundaries and a six in his run-a-ball unconquered innings of 54 minutes. For Odisha, pacer Basant Mohanty took four wickets today to end with innings figures of 5/76.

In reply, Odisha were 25 for one in their first innings with opener Girjia Rout and Govinda Podder batting on 14 and one respectively at the draw of stumps. The other opener, Subhrajit Sahoo was run out in the fourth over after scoring 10 runs. Odisha now trail by 328 runs with nine first innings wickets in hand. 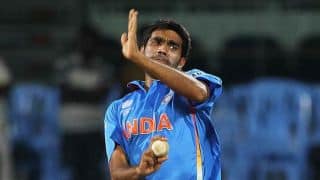 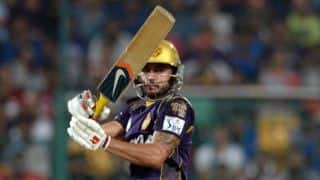