Skipper Mahesh Rawat was the top-scorer for Railways with 68 runs.

Mumbai seamer Shardul Thakur produced his career-best bowling show as his six-wicket haul helped his side bowl out Railways for 242 but poor shot selection put the visitors in trouble on the third day of Ranji Trophy match here today. At stumps, 40-time champions Mumbai lost openers Sushant Marathe (5) and Bravish Shetty (0) and Aditya Tare (0) to end the day at 24 for 3.

Shetty flashed at a Krishnakant Upadhyay outswinger while Marathe, clearly looking uncomfortable, did not display any footwork to get played on by a Anureet Singh delivery. Tare (0) went for a non-existent single to get run-out. With inclement weather playing spoilsport, Mumbai were desperate to get at least three points from the game after their defeat against J&K in the opening match.

Skipper Mahesh Rawat (68) was the top-scorer with 10 fours in 97 balls while burly all-rounder Arnab Nandi (60) played some attractive shots to take the home team closer to 250 as Shardul grabbed 6 for 59 in 24 overs, polishing off the lower order with precision. However, the main wicket was taken by debutant pacer Badre Alam who got the ball to sufficiently move as Rawat saw the off-bail being clipped. Rawat, who was suffering from fever, played some lovely shots. He played a lot of cut shots, adding 57 runs with Arindam Ghosh (34) for the fourth wicket.

In the lower order, it was Arnab, who shouldered the responsibility of taking his side from a precarious 126 for five to past 200. The two shots by the Bengal discard that stood out was a cover drive off Abhishek Nayar and a pull off Javed Khan. He was the last man out but by then Railways have reached to a safe score. 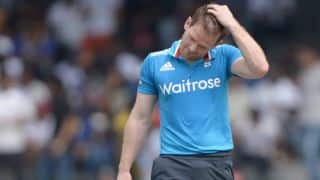 Sri Lanka vs England 2014: Eoin Morgan's poor form continues as he is dismissed for just four