All-rounder Binny would want to be more among the wickets, having taken only two so far.

A resilient Railways will have to dig deep to stop the onslaught of defending champions Karnataka in their home Ranji Trophy cricket tie beginning at the Karnail Singh Stadium here tomorrow.

Karnataka have continued their imperious form of last season with comprehensive victories over Tamil Nadu and Bengal in Group A.

Railways go into the contest, having taken three points each from their draws against Madhya Pradesh and Mumbai at home. Their faster bowlers fired on both occasions, helping the team get the crucial first innings lead.

They will be expecting a lot from opening bowling combination of Anureet Singh and Krishnakant Upadhyay, who posed serious problems for the batsmen in the first two matches sharing 21 wickets among each other.

While the bowling effort has been promising, Railways would want to improve significantly batting-wise. Arindam Ghosh has been the only one to reach the three-figure mark (against MP), while captain Mahesh Rawat and Arnab Nandi scored handy half centuries in a low-scoring affair against Mumbai.

It will be interesting to see how a low-profile Railways fare against a star-studded Karnataka led by in-form pace spearhead Vinay Kumar.

The other popular names in the squad are India’s 2015 World Cup probables Robin Uthappa, Manish Pandey and Stuart Binny, who are relying heavily on their Ranji showing to make the final 15 for the mega event in Australia and New Zealand.

All-rounder Binny would want to be more among the wickets, having taken only two so far. Uthappa, playing as a pure batsman in the side, has started the competition well with a fifty each in the second innings of the two games.

Pandey has a fifty to his name in three innings. Captain Kumar is leading from the front, having picked 14 wickets including the six-wicket haul in the second innings of Bengal at Eden Gardens. Sreenath Aravind has given him good support by collecting 13 wickets. 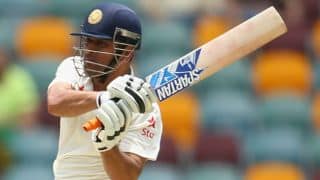 India vs Australia 2014-15, 2nd Test at Brisbane: MS Dhoni laments half of the decisions not going in their favour