Ranji Trophy 2014-15, Round 5: Pranay Sharma's unbeaten century propels Rajasthan to 295 for four against

An unbeaten century by opener Pranay Sharma and half-centuries by Ashok Menaria and Rajesh Bishnoi  steered Rajasthan to 295 for four against Punjab on day one of their Ranji Trophy Group B match. At the close play, Pranay was batting on 118 off 273 balls studded with 16 fours and a six, and giving him company at the other end was Puneet Yadav on 25.

Earlier, Punjab’s move to put Rajasthan in to bat upon winning toss paid off initially as the hosts lost opener Vineet Saxena (0) and one-down batsman Robin Bisht (1) cheaply with the scoreboard reading a miserable 23 for two. But Pranay, playing his first Ranji match of the season, held on to his wicket and in the able company of Menaria (65) consolidated the innings by putting on 102 runs together for the third wicket.

He then added another 130 runs for the fourth wicket with Bishnoi Sr (67). Pranay reached his maiden hundred and remained unbeaten at the end of the day. For Punjab, Sandeep Sharma, Sidharth Kaul, Baltej Singh and Sarbjeet Ladda took wicket apiece. Star all-rounder Yuvraj Singh, who is being tipped for a slot in the India’s ICC World Cup 2015 squad for injured all-rounder Ravindra Jadeja, bowled one over for seven runs. 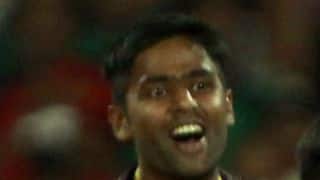 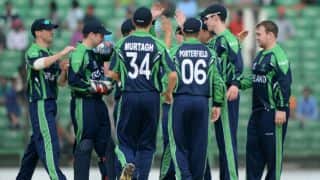