Saurashtra are still trailing by a huge margin of 351 runs.

Opener Sagar Jogiyani struck a fighting hundred in Saurashtra‘s gritty reply to Punjab‘s mammoth total as the Ranji Trophy Group B cricket match is heading for a draw, here.

Jogiyani scored 145 and shared two century-plus stands with Bhushan Chauhan (49) and Arpit Vasavada (78) as the hosts ended the day three at 308 for four after resuming the first innings at 27 for no loss.

Jogiyani almost batted through the day, losing his wickets towards the end when he was caught by Kohli off pacer Maninder Singh. In his 283-ball knock he punished the Punjab bowlers with 16 shots to the fence and two over the ropes.

Saurashtra are still trailing by a huge margin of 351 runs and Punjab look like running away with the first innings lead, having declared their first innings at 659 for seven.

Sheldon Jackson (7) and Kamlesh Makvana (1) were at the crease when stumps were drawn for the day as bowlers toiled hard on a flat batting wicket.

Openers Jogiyani and Chauhan batted with caution, seeing off the first hour, but the latter was castled by left-arm spinner Rajwinder Singh. Chauhan’s 49 came off 109 balls and with the help of six fours and a six.

Jogiyani though found another able ally in Vasavada and the Punjab bowlers had to wait for till the fag end of the day to get success. Vasavada batted for more than three hours and with Jogiyani raised a 180-run partnership for the second wicket. He faced 156 balls and hit seven boundaries. 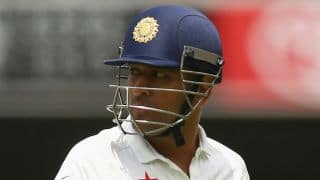