In their second innings, Punjab scored 15 runs in four overs without losing any wicket.

Sheldon Jackson hit a career-best unbeaten 181 but Saurashtra still conceded first innings lead to Punjab as their Ranji Trophy Group B cricket match ended in a draw on the final day of the contest, here today.

Chasing Punjab’s mammoth first innings total of 659, Saurashtra were all out 559 as Jackson fell short of partners on the other end, missing out on a double hundred.

Jackson, who along with Kamlesh Makvana (13), began the day for the hosts, scored at a brisk pace, consuming just 234 balls for his 181, which included 19 fours and four shots over the ropes.

However, Saurashtra kept losing batsmen one after another and for the lack of partnerships, they fell short of Punjab’s total by 100 runs.

Only Divyaraj Chauhan (44) supported Jackson well with his 121-run stand for the sixth wicket. Once Chauhan was castled by Siddharth Kaul the lower-order batsmen of the hosts failed to respond to the challenge.

In their second innings, Punjab scored 15 runs in four overs without losing any wicket. 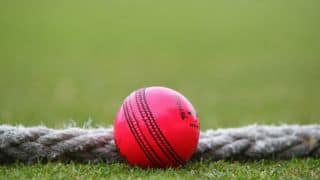