As they have not played any Ranji Trophy final ever, they are yet to participate in the Irani trophy.

Andhra Pradesh’s official home ground is the Vishakhapatnam’s APCA-VDCA Stadium, they also play some of their matches at Vijayawada and Anantapur. As they have not played any Ranji Trophy final ever, they are yet to participate in the Irani trophy. Andhra missed out on the semi-final berth during the 2007-08 season, captained by Mannava Prasad, after they managed to win just two from their six Elite division matches in the group stage. During the season, the team included players like of Arjun Kumar, Mohammad Faiq, Sarath Babu and Paidikalva Vijaykumar. Ranji Trophy 2015-16: Assam squad and team preview

Although not successful in Ranji Trophy, Andhra have fared well in the Vijay Hazare Trophy (One-Day tournament), in February 2013 when they beat Goa by 170 runs. Andhra batted extremely well and scored 261 for 6 in 50 overs, with KS Bharat playing a blistering 125. On the other hand, Goa were dismissed for 91 in just around 26 overs and suffered to an embarrassing defeat. Jharkhand in Ranji Trophy 2015-16: Dark horses capable of causing few upsets

The 2013-14 season saw Andhra finish seventh winning just one match in the whole tournament. However, the results were decent in the limited-overs. The Syed Mushtaq Ali T20 tournament saw them finishing at the bottom of the South Zone group, thus failing to move into the Super League. Although they faced a similar situation in the Vijay Hazare trophy, they managed to finish third in the South Zone group, behind Tamil Nadu and Karnataka.

Mohammad Kaif: The former Indian batsman, who was once known for his classy batting and helping India win from difficult situations is once again the key player for Andhra and is the skipper of the side. Having over 9,000 runs in First-Class cricket with an average of 40.52, along with 19 centuries and 55 half-centuries with a highest score of 202, which undoubtedly makes him the key player in the side. 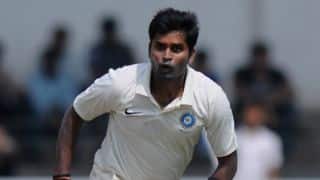 POLL: Do you think Karnataka can win the Ranji Trophy for a third consecutive time?