Ravikumar Samarath scored a brilliant 131 to bring Karnataka in the game after Assam had taken the first innings lead.

Assam held on for a fighting draw against Karnataka in the Group A match at the Barsapara Cricket Stadium in Guwahati. Starting the day with just a wicket down, Assam had to fight hard as Karnataka at once at them in trouble at 4 for 3 with Karnataka skipper Vinay Kumar taking two wickets in quick succession. Gokul Sharma though held fort with Arun Karthick and both of them shared a 132-run stand to steady Assam and raise the hopes of a well earned draw which were converted to reality after Arun completed his century. Karnataka having bowled out for 187 in their first innings, with Syed Mohammad taking 7 for 44 where brought back in the game courtesy of a brilliant century from Ravikumar Samarth which helped them set a huge target for Assam. Cricket updates: Assam vs Karnataka, Guwahati

Assam who were shot out for a score of 194 in the first innings, were always playing catch up but the inexperienced team rose up to the challenge. Once Gokul Sharma departed for 55, it was Arun who took up the mantle to help Assam fight their way to a well earned draw. Karnataka missed a lot of their preferred players and will be disappointed with the way they played the game. They though will rue conceding three points points and hope for a better result in the next game that they play against Bengal on October 8. Assam will be delighted to have secured a draw against a formidable side at their home. 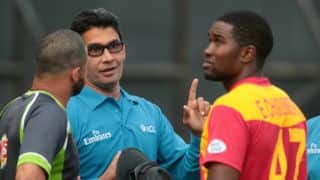