Karnataka riding on Karun's unbeaten 119 reached 322 for four in 83 overs at stumps on the second day.

Bengaluru: Upcoming talent Karun Nair made a mincemeat of Bengal bowling with a crushing century as defending champions Karnataka comfortably took the first innings lead against Bengal in a Ranji Trophy group league encounter, here today. In reply to Bengal’s first innings score of 312, Karnataka riding on Karun’s unbeaten 119 reached 322 for four in 83 overs at stumps on the second day. Karun was involved in two crucial partnerships — 114 for the third wicket with Manish Pandey (53) and 113 for the unbroken fifth wicket stand with all-rounder Shreyas Gopal (54 batting). Karun, who was recently called up as a reserve for the India Test team hit 18 boundaries in 173 balls as Karnataka scored runs at a rate of close to four runs per over. Read all Ranji Trophy 2015-16 team previews here

The two senior most bowlers in the Bengal line-up — pacer Ashoke Dinda (1 for 61 in 15 overs) and left-arm spinner Pragyan Ojha (1 for 95 in 23 overs) were the offenders. While Dinda’s propensity to bowl short cost Bengal dearly, it was clear from Ojha’s performance that he is well past his best as neither did he get any appreciable turn nor zip from the Chinnaswamy track. He often bowled short as Karun, Pandey and Gopal took full advantage of those bad deliveries. While Dinda provided an early breakthrough removing Robin Uthappa (3) cheaply, Ravi Kumar Samarth (30) and Shishir Bhavane (32) added 51 for the second wicket before Samarth edged one off Veer Pratap Singh to Wriddhiman Saha, behind the stumps. Read: Karnataka vs Bengal, Ranji Trophy 2015-16: Sreevats Goswami’s controversial

Bhavane was retired hurt in the 27th over after which Karun and Pandey joined forces to flay the Bengal attack. It was Laxmi Ratan Shukla, who removed Pandey caught by Shreevats Goswami while CM Gautham was snapped by Ojha. But that was the end of the joy for Bengal as their bowlers then lacked penetration to get Karnataka batsmen out. With a fragile batting line-up at its disposal, there is every possibility of an outright defeat for Manoj Tiwary and his boys in case Karnataka get a lead in excess of 150. 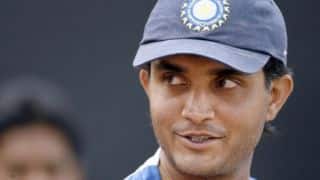