In the Ranji Trophy 2016-17 competition Round 2 match between Jharkhand and Karnataka which was played at the Greater Noida Sports Complex Ground, Greater Noida, ended in a draw after the game saw 4 days of runs scored by batsmen from both teams. Karnataka won the toss and opted to bat first and were rewarded as their opener Ravikumar Samarth scored a brilliant double hundred 235 which helped his team post a target of 577 for the loss of 6 wickets. It was Stuart Binny who also came in and blasted off as he scored 97 towards the end of this innings. In reply to the mammoth total of 577, Karnataka middle order batsman Ishan Kishan played a beautiful knock off 159 from 211 balls to put his team post a total of 374. READ:Ranji Trophy 2016-17 Points Table & team standings

It was also Saurabh Tiwary’s 91 which shouldered the responsibility alongside Kishan. Further, experienced Jharkhand batsman Ishank Jaggi and young Rishabh Pant added 72-runs for fifth wicket. Ishan kept batting but in between Jaggi fell followed by Kaushal Singh s wicket. Jharkand were 215 for six and that crunch situation, Ishan stood tall at the crease, scored his second First-Class ton, and remained unbeaten after making 118 at the end of day three.Their team did avoid the follow-on and Karnataka a lead of 203.

By this time it was very much clear that the match would end in a draw and karnatak team batted till the end of Day four. By the end of day Four, Karnataka had posted a total of 162 for the loss of 3 wickets as they had Karun Nair and Kaunain Abbas at the crease who had made scores of 54 and 51 respectively. Ravikumar Samarth who scored a double-century was adjudged Man of the Match 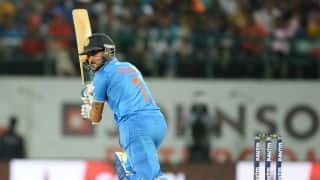