What went wrong for Services was their batting order crumbled in the first innings with only Samsher Yadav scoring a ton but others failed to create an impact.

In Ranji Trophy 2016-17, Round 2, Day Four, Tripura hammered Services by 220 runs to earn six points. Winning the toss, Services chose to field and had a good grip on the match as Tripura was bundled for a modest yet tricky score of 275 in first innings. What went wrong for Services was their batting order crumbled in the first innings with only Samsher Yadav scoring a ton but others failed to create an impact. Tripura sniffed in with a vital lead and after that it was Udiyan Bose and Smit Patel’s centuries which propelled Services to chase 383. Services did not get back into the game and lost by 220 runs with Gurinder Singh picking four and Manishankar Mura Singh claiming three scalps. READ: Ranji Trophy 2016-17 Points Table & team standings

Bose and Patel ensured that Tripura, with their slender but crucial lead in the first innings, remained ahead of their opponents. The two batsmen added 292 runs for the second wicket scoring at a little more than 3.50 runs an over. While Bose managed to bring up his 150, left-handed Patel was quieter of the two, but remained unbeaten at 127 on Day Three. Bose has faced 263 deliveries for his 157, which was studded with 14 boundaries and 3 sixes. On the other hand, Patel struck 13 fours in his vital innings. Earlier in the game, Tripura had taken a lead of 42 runs as they bowled out Services for a moderate total of 233 after posting a formidable 275 on board in their first essay. Their bowlers picked wickets in regular intervals, with Gurinder and Mura sharing six scalps each in the match, but Bose-Patel’s partnership became the turning point. 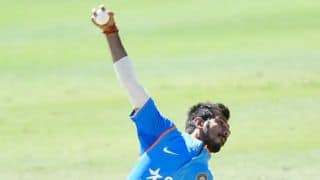