A combination of good batting by Gujarat s middle-order and a few missed chances hurt Mumbai on Day Two of the Ranji Trophy 2016-17 final being played at the Holkar Stadium, Indore.

A combination of good batting by Gujarat s middle-order and a few missed chances hurt Mumbai on Day Two of the Ranji Trophy 2016-17 final being played at the Holkar Stadium here in Indore as their opponents Gujarat took the all-important lead. Continuing from where they had left on Day One, Gujarat players showed grit, determination and hunger to excel in the first Ranji final of their lives to end the second day on 291 for 6, being ahead of Mumbai s first-innings total by 63 runs. Their heroes for the day were skipper Parthiv Patel (90) and Manprit Juneja (77), who missed out on scoring hundreds but played fine knocks to ensure their side finished on top at the close of play.

Both Parthiv and Juneja were lucky as they were reprieved earlier in the day. Parthiv survived a caught-behind off a no-ball while Juneja was dropped by Shreyas Iyer at short midwicket. However, with things tilting in Gujarat s favour, the third umpire stepped in to balance them a bit. He ruled Juneja out when Shardul Thakur had overstepped once again a case almost identical to that of Parthiv. For once, Gujarat were at the receiving end of the umpiring howlers. Apart from the two batsmen, Bhargav Merai (45) also added crucial runs; of course though, not without a reprieve. He had edged a delivery from Abhishek Nayar straight into Aditya Tare s hands. But the umpire Anil Kumar Chaudhary thought otherwise.

These incidents notwithstanding, Gujarat s middle-order played well to get their side beyond Mumbai s 228-run knock after a slow start by their openers on a chilly Indore morning. Priyank Panchal and Samit Gohil, who had scored the bulk of the runs for their side in this season so far, failed when it mattered the most. Gohil had been dropped on the very first delivery of Gujarat s innings by on Day One by Prithvi Shaw an act that cost him his place in the first slip. But the opener from Anand failed to capitalise on to the chance and fell cheaply for 4, even as his wife and childhood coach-turned-father-in-law cheered for him from the stands in the most important game of his career thus far.

His opening partner and the leading run-getter this season, Panchal too fell early in the summit clash. He weathered the early storm and played out 51 balls during his 92-minute stay in the middle to score a mere 6. After his dismissal, it was Merai and Parthiv s stand of 69 for the third wicket that resurrected the Gujarat innings and the subsequent stand of 120 runs for the fourth wicket between Parthiv and Juneja gave a further boost to Gujarat, taking them beyond Mumbai s total. While Parthiv mixed caution with aggression, Juneja s innings was more attacking as he did not shy away from playing his shots. By the time the 26-year-old batsman was dismissed, he had scored crucial 77 runs at a strike rate over 80.

Once Parthiv and Juneja were dismissed, Rujul Bhatt (25) and the two unbeaten batsmen Chirag Gandhi 17* and Rush Kalaria 16* held the fort and kept Gujarat in a good stead at stumps.

For Mumbai, Shardul and Nayar bowled their heart out. The former ended the day with 2 wickets but was terribly unlucky not to add more to his tally. Nayar, as always, led the attack with all his experience and got 3 wickets. But lack of support from fielders and the spinners Vishal Dabholkar and Vijay Gohil pegged their efforts back.

Poor umpiring remained the topic of debate for the day and it once again brought the poor standard of umpiring in domestic games to the fore. It took some sheen off the high voltage Ranji final. 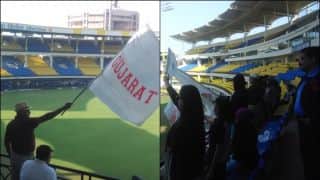