Mumbai lost two wickets in the first session, but young Prithvi Shaw s unbeaten half-century kept them in good stead against Gujarat on Day One of the Ranji Trophy 2016-17 final in Indore

Indore: Mumbai lost two wickets in the first session, but young Prithvi Shaw s unbeaten half-century against Gujarat kept them in good stead on Day One of the Ranji Trophy 2016-17 final here in Indore. Batting first, Mumbai did not have the best of starts when they lost Akhil Herwadkar early. The southpaw could manage just 4 runs on his return from injury and add 13 for the first wicket with Shaw, playing only his second match. Shreyas Iyer, Mumbai s leading run-scorer this season, walked in at No. 3 and added 41 runs with Shaw for the second wicket before perishing for 14. At lunch, Shaw was unbeaten along with Suryakumar Yadav, with Mumbai s score reading 97 for 2.

On a cold and foggy morning in the City of the Holkars, Gujarat Parthiv Patel won the toss and put Mumbai in bat first with the idea of exploiting early moisture. Gujarat do not have fond memories of the city: their solitary appearance in a Ranji Trophy final, back in 1950-51, had also been at Indore. They had lost the contest to Holkar. Here, both Gujarat and Mumbai made a few changes for the title clash. Mumbai brought in a fit-again Herwadkar for Praful Waghela and left-arm spinner Vishal Dabholkar for off-spinner Akshay Girap. Gujarat were forced to make a change, as they missed out on services of their strike bowler Jasprit Bumrah, who has joined the national team for ODIs against England. He was replaced by pacer Chintan Gaja.

RP Singh, who has looked a completely different bowler of late, started the proceedings for Gujarat. He bowled tight lines on the wicket upfront and tested the batsmen. Herwadkar opened his account with the first boundary of Mumbai s innings in RP s third over of the morning. This was followed by Shaw s first four in the next over being bowled by Rush Kalaria. However, Gujarat did not have to wait for long to get their first success. In the very next over, RP trapped Herwadkar in front of the stumps. Iyer then joined Shaw and the two immediately started playing their shots.

A few boundaries quickly followed but soon came a chance too when Shaw edged a delivery from Gaja that flew towards the slips. It could have been a regulation catch for the first slip, but an overenthusiastic Samit Gohel (who made headlines with a triple-hundred earlier this year) flew in from the second slip, intercepted it with a dive, and spilled the catch. Shaw, then 30, made the most of it by registering his second fifty in just the third innings. He continued from where he had left in the semi-final, which also happened to be his First-Class debut. The 17-year-old unleashed a flurry of good strokes to back up his solid defence, thus justifying why he has been touted as the next big thing to come from Mumbai. He has so far hit 10 fours in his unbeaten knock of 70.

Shaw survived a close call of a catch just before lunch, when spinner Hardik Patel created a chance in his very first over. The ball was short and pitched outside off; Shaw cut it hard towards point; and Chirag Gandhi, one of the finest fielders in India, dove forward, caught the ball, and appealed for a catch. The umpires referred to the third umpire, and Shaw was ruled not out as the ball had bounced before Gandhi had completed the catch.

Mumbai lost Iyer after the score went past 50. Iyer, hero of the last Ranji Trophy season, paid dearly for stepping out of the crease and chasing a delivery wide outside off. The ball took his edge and went straight into Parthiv s gloves. Suryakumar and Shaw then played out the remaining time before lunch, ensuring no other blow to the defending champions. 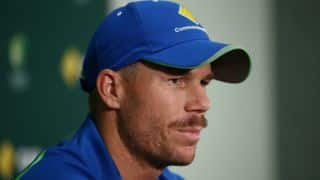 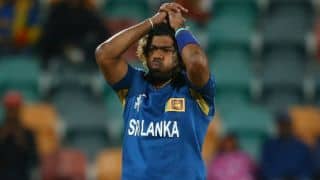