The first day of Ranji Trophy 2016-17 Group C match between Tripura and Haryana saw as many as 14 wickets tumble, with the latter team gaining a 161 runs lead over the former.

The first day of Ranji Trophy 2016-17 Group C match between Tripura and Haryana saw as many as 14 wickets tumbling at the Eden Gardens in Kolkata. Tripura won the toss and asked Haryana to bat first, a decision which proved fruitful for them. Haryana got off to a poor start losing half their side for just 97 runs. Sanjay Majumder initiated a collapse which saw Tripura’s in-form batsman Nitin Saini depart for 16. Shubham Rohilla has already fallen prey to Majumder for 3. Majumder’s partner in crime, Manishankar Murasingh, soon came into his own, and nabbed Guntashveer Singh for justone.

The only batsman who showed some resistance for Haryana was Chaitanya Bishnoi, who stood in middle like a wall adding 52 crucial runs. Rajat Paliwal, could not add much to the score went for a 33-ball 9 to Gurinder Singh. Rohit Sharma could not do much, becoming Majumder’s third victim. Rahul Tewatia held fort for Haryana, putting up much needed runs with the lower order batsmen.

Joginder Sharma’s stay was a short one in the middle but a mini-blitz of sort. Joginder was run out for a 23-ball 21. Sanjay Pahal lasted for just 29 balls, as Murasingh rattled his stumps when he was batting on 10.

It was the last wicket stand between Harshal Patel and Mohit Sharma that enabled Haryana go past the 200-run mark. The pair added 66 runs for the 10th wicket before Harshal gave his wicket away for 26 to Bunti Roy. Mohit remained not out on 39 as Haryana were bundled out for 231.

In reply, Tripura had a torrid start, losing 2 key wickets in a span of 8 overs. Udiyan Bose, who has been their most prolific scorer departed for a 8-ball 4, while Samrat Singha was out making just one run. Nightwatchman Majumder could not do much, departing on an 11-ball duck. He became Harshal’s second wicket after Udiyan gave a simple caught behind to the keeper.

With wickets falling like nine pins, Bishal Ghosh went on to bat aggressively. Bishal was eventually out for 36 to Joginder. Smit Patel remained unbeaten on 26 runs with Tripura on 70 for 4, trailing Haryana by 161 runs. 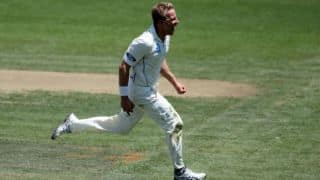