Jharkhand s middle-order batsman Saurabh Tiwary scored 65 not out before retiring hurt, helping his side dominate on Day Two.

Jharkhand reached a total of 236 for 5 wickets and now lead Odisha by 84 runs in the ongoing Ranji Trophy 2016-17 Round 9 contest. Jharkhand s middle-order batsman Saurabh Tiwary scored 65 not out before retiring hurt, helping his side dominate on Day Two. Jharkhand currently have Kaushal Singh and Shahbaz Nadeem at the crease batting on 22 and 0 respectively. From the Odisha side, Basant Mohanty has been the best bowler as he finished with the figures of 2 for 43 while Suryakant Pradhan, Deepak Behera and Govinda Poddar got 1 wicket each.

Resuming from the overnight score of 9 for no loss, both Jharkhand openers Sumit Kumar (13) and Anand Singh started off looking to solidify their innings. But soon, Odisha pacer Pradhan struck and removed Sumit when Jharkhand had just reached a total of 22. Virat Singh, who walked in at No. 3 for Jharkhand, provided the much-needed stability to his team along with opener Anand at the other end. These both were involved in a stand of 63 for the second wicket which turned the game s balance in favour of Jharkhand.

Anand (33) was dismissed by Poddar resulting in Jharkhand losing 2 wickets at the score of 85. It was Tiwary who played a well-constructed knock of 65 not out along with Anand to help Jharkhand inch closer to the Odisha total. Anand was looking well-settled but was dismissed by Mohanty completely against the run of play for 57 runs off 124 deliveries.

Soon Jharkhand had to suffer one more blow as Tiwary who was playing an anchor role had to return back due to injury. Shortly after he retired hurt, Mohanty struck for Jharkhand by removing Ishank Jaggi. Ishan Kishan was trapped leg-before by Deepak Behera in the penultimate over of the day. 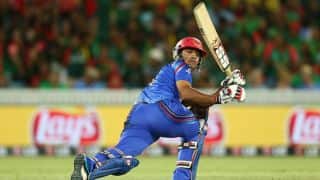