Defending champions Gujarat are under the pump against Bengal. Resuming the day at 180 for 6, Piyush Chawla and Rujul Bhatt couldn’t rescue the side and conceded a 130-run lead. In reply, Bengal have raced ahead with the help of Abhimanyu Easwaran’s blitz. At stumps, Bengal’s overall lead read 307 with 9 wickets in hand.

Day’s play brought to you by……. (we have no sponsor)

Chawla and Rujul had survived the final hours of Day Two. They were expected to carry on, but regular strikes hurt them. Ashok Dinda was economical with a wicket on Friday; he took two more today, ending with 3 for 48. He was well-complimented by Ishan Porel and Boddupalli Amit. The trio shared 9 wickets to restrict Gujarat. From 219 for 6, they were bundled out for 224.

In reply, Bengal did not let go off the momentum. Easwaran continued his sublime form and remained unbeaten on 93*. Abhishek Kumar Raman was the only wicket to fall (33). Bengal will look to bat till the second session on Sunday, and declare with a lead around 450.

Gujarat will like to stay in the hunt by chipping in with regular breakthroughs and restrict the run-flow. 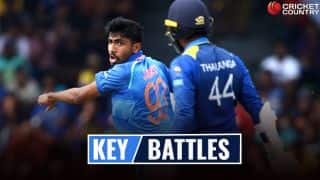