Bengal have progressed to the knockouts on five occasions in Ranji Trophy since 2000.

Ranji Trophy 2017-18 quarter-final won’t be an easy match for Bengal: they are facing defending champions Gujarat at Jaipur. Sourav Ganguly, no less, is aware of the significance and the difficulty of this clash, and is present with the side in the dugout. This evokes memories of the 2004-05 Ranji Trophy, when Ganguly and Utpal Chatterjee both featured in the Madhya Pradesh match to save Bengal from relegation.

With the bengal ranji team at Jaipur for quarter final game pic.twitter.com/XvT7NyMxU7

Bengal made it to the last eight courtesy 2 victories, 3 draws and a lone defeat (in the hands of Vidarbha). They owe a large part of their success to the seam-bowling pair of Ashok Dinda and Mohammed Shami. The duo have accounted for 48 of the 94 wickets taken by Bengal this season. Apart from them, Abhishek Raman and 19-year-old Ishan Porel have also made marks with vital contributions. Skipper Manoj Tiwary has in crisis situations as well.

“I always believed we will qualify for the knockouts. While I cannot disagree to the fact that there have been slip-ups from our end, I feel that we will have to give emphasis on our fielding and develop for the knockouts. In addition to that, I feel that the bowlers who are bowling alongside (Ashok) Dinda need to do better as we cannot afford mistakes in the knockouts. The team will definitely look into this”, Tiwary ahead of the quarters.

At the time of publishing this news, Bengal are 47 for 3 after being put into bat versus Gujarat. 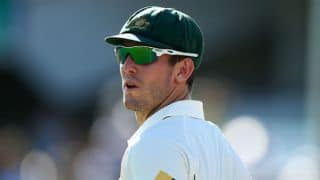