Bengal and Delhi are one step away from featuring in their maiden Ranji Trophy final since 2010. Bengal last won the championship in 1989-90, while Delhi lifted their last title in 2007-08. Though Bengal are the only side among the semi-finalists to have lost a match this season, they will hold an edge over Delhi. The reunion of Mohammed Shami and Ashok Dinda, along with the absence of Delhi s pace spearhead Ishant Sharma, will keep Bengal a step ahead. In addition, not a single Delhi batsman features in the top 10 run-scorers list from the current edition.

Bengal have a solid batting line-up. While no Bengal batsman has got 600 runs this season, three Abhishek Raman, Abhimanyu Easwaran, and Anustup Majumdar have gone past 500. As usual, they have Manoj Tiwary to lead from front and Sudip Chatterjee to provide resilience. And this time they have Wriddhiman Saha as well.

Bengal have not relied on spinners this season, but have enough arsenal in their pace battery. With Shami s return, Dinda will be in top gear with the workload being divided.

Note: Shami and Dinda accounted for 48 out of Bengal s 94 scalps in the group stages.

Nitish Rana, Delhi s most successful batsman this season, is placed at the 21st position on the run-getters list. Gautam Gambhir stands comes 24th, with 505 runs. The likes of captain Rishabh Pant, Kunal Chandela, Dhruv Shorey, Manan Sharma and Himmat Singh will have to share responsibility. Delhi s middle order hasn t lived up to expectations, though their lower order has made vital contributions. This time the challenge will be stiff, surviving against Shami and Dinda.

To add to Delhi s woes, Ishant is out of the semi-final. The Delhi captain would be missing the crucial clash due to ankle niggle. Ishant had 20 wickets from 4 Ranji matches at 12.80. His absence will add to the pressure, with Vikas Tokas leading the attack.

Delhi, despite the shortcomings in the present edition, lead Bengal in head-to-head encounters. In 20 matches, they have won 5 and lost 2. 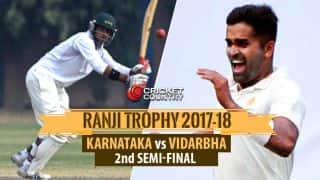 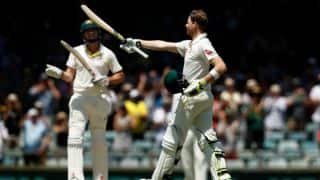