The 84th edition of Ranji Trophy commenced on Friday.

Ranji Trophy 2017-18 has commenced. Andhra Pradesh summed up Tamil Nadu’s first innings for a paltry 176 as Murali Vijay, Baba Indrajith and Ravichandran Ashwin flopped, whereas Bhargav Bhatt’s 4-for and Prithvi Yarra’s 3-wicket haul handed advantage to their side. On the other hand, Madhya Pradesh recovered from early jolts to end Day One at 268 for 5 with Devendra Bundela top-scoring with 99.

At MA Chidambaram Stadium in Chennai, Tamil Nadu opted to bat. However, their innings never got going due to early breakthroughs from Andhra’s bowlers. A lot was riding on senior pro Vijay, but he fell for 4. Skipper Abhinav Mukund was also sent back by Yarra, with a return catch for 11. Kaushik Gandhi and Baba got starts, but perished to add to Tamil Nadu’s woes. Baba Aparajith held his end and played a fine innings (51 off 137 balls), but found no support. Bhargav, on the back of good Duleep Trophy 2017-18, wrecked havoc and ran through TN’s middle and lower order. Ashwin also disappointed after being dismissed for 9. At stumps, Andhra trail by 168 runs.

Meanwhile, Baroda chose to field against Madhya Pradesh at Holkar Stadium, Indore. MP got off to a rough start with openers back in the hut at 26 for 2. Naman Ojha and Harpreet Singh Bhatia were involved in a brief stand, but perished in quick succession. The onus fell on skipper Bundela and Shubham Singh, and the duo did not falter. They started off slowly and played their shots once settled. Bundela, however, missed out on a century by falling for 99. Shubham remains unbeaten on 88, and will start afresh to take his side past 350 on Saturday. 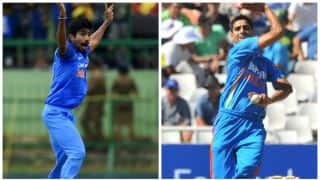