It was Prithvi Shaw's fourth century in First-Class cricket.

At Bhubaneswar: Prithvi Shaw s second successive century and his fourth overall in First-Class cricket saw Mumbai take the driver s seat on Day One of Round 4, Ranji Trophy 2017-18. However, three quick wickets in the final session brought down Mumbai to 264 for 6.

Although Mumbai lost their opener Akhil Herwadkar early on, Shaw joined hands with Ajinkya Rahane (49) to steady the ship. Rahane is playing his first game of the season. The duo added 136-run stand. Basant Mohanty struck twice to remove Herwadkar and Shaw.

Shaw s 158-ball stay saw 18 fours. Rahane too was dismissed in succession as Mumbai headed to tea at 181 for 3. Suryakumar Yadav (23) and Siddhesh Lad (33) then tried to keep the momentum going. But it was Biplab Samantray who struck twice and removed the settled batsmen. Dhiraj Singh then joined the party to remove all-rounder Abhishek Nayyar in the 81st over. Aditya Tare (28*) and Akash Parkar (3*) will try to keep the innings floating in favour of Mumbai on Day 2.

At Vadodara: The Baroda versus Tripura match also saw a century. Vishnu Solanki got to his maiden First-Class century that powered Baroda to 304 for 5.

Opting to bat, Baroda put up a decent opening stand of 41. However, they slumped to 95 for 3 in no time. Solanki then grabbed the opportunity and got to his maiden ton. He had scored half-centuries against Andhra in the previous game. In the process to his century, Solanki secured partnerships with Swapnil Singh (50) and Abhijit Karambelkar (154). The latter is presently batting on 75.

Tripura had something to rejoice at the end of the day removing the dangerous man Solanki. Gurinder Singh leads amongst the bowlers with 2 wickets.

At Vizianagram: Andhra s success, on the other hand, relied on 19-year old Prithvi Raj Yarra s three-wicket haul. His entry in the 16th over was a boon to Andhra.

Yarra removed opener Aditya Shrivastava. It was then over opener Rajat Patidar (37) and Shubham Sharma (60). The duo added 68-run stand before Yarra came back and removed Patidar. Soon Shubham also found his way back in the hut. Naman Ojha and Shubham added 39-run stand.

Harpreet Singh then revived the Madhya Pradesh innings with an unbeaten 47 and building a sixth-wicket stand of 48 along with Ankit Sharma 18. 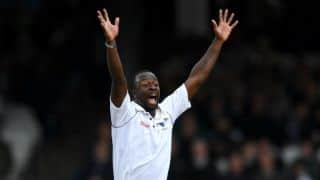 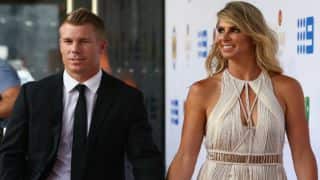