An upbeat Delhi will fancy back- to-back wins in the Ranji Trophy when they take on a struggling Uttar Pradesh in a Group A game on Wednesday.

New Delhi: An upbeat Delhi will fancy back- to-back wins in the Ranji Trophy when they take on a struggling Uttar Pradesh in a Group A game on Wednesday. The match, originally scheduled to be played at the Kotla, will now be staged at the Palam Grounds as the Indian team faces New Zealand in the opening T20 at Delhi’s only international ground on Wednesday. The morale of the Ishant Sharma-led Delhi is on a high after the big win over Railways, giving them enough confidence and belief that they can steamroll Uttar Pradesh. The visiting team, led by India discard Suresh Raina, has suffered a disastrous start to their Ranji campaign, losing against Railways and Maharashtra while another game against Hyderabad had to be abandoned without a ball being bowled. Sehwag: Honoured to have gate named after me at Ferozshah Kotla

Raina the batsman too has had a tough time with scores of 0, 5, 6, 29 in the four innings he has played so far. Uttar Pradesh’s batting has let them down in both their matches against Maharashtra and Railways. Delhi, on the other hand, overcame the disappointment of a draw against Assam with a comprehensive win over Railways at the Karnail Singh Stadium. The star performer for them has been all-rounder Manan Sharam, who has scored a half century and hundred to go with his 10 wickets in two matches. Ranji Trophy 2017-18, Round 2, results: Delhi, Karnataka dominate Group A

Another left-arm spinner, Vikas Sharma, too has been effective with nine wickets in two matches. Captain Ishant Sharma, who has not played for India since the Ranchi Test against Australia in March, has picked up nine wickets including a five-wicket haul against Assam in team’s tournament opener. 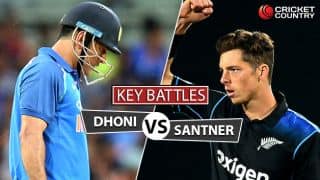