Earlier in the day, Mohammed Shami had taken a 6-for but his efforts went in vain.

Pune: Day Three of five-day encounters are termed most crucial. The match changes swiftly, and both sides give tough competition before one takes full command. The first semi-final of Ranji Trophy 2017-18 witnessed all sorts of twists and turns before Delhi marched ahead of Bengal to enter the final. Delhi resumed at 271 for 3, trailing by 15 runs. They were expected to go beyond 400. However, Mohammed Shami’s 6-for restricted Delhi’s lead. Delhi, however, went past the opponents courtesy a meek surrender to seal the match by an innings and 26 runs.

Delhi resumed at 271 for 3. Nitish Rana and Rishabh Pant departed soon as Shami and Dinda looked charged-up. The duo were relatively expensive during the 231-run opening stand between centurions Gautam Gambhir and Kunal Chandela. Nonetheless, they showed the stomach to fight and injected regular breakthroughs. Shami, in particular, hit the right areas consistently. As a result, Delhi were reduced to 281 for 5.

Himmat Singh and Manan Sharma helped Delhi recover. The pair stitched a vital 47-run stand to scale up the lead. The last four wickets added only 70 runs, but managed to stretch the lead to three figures. Himmat’s 60 stood out amidst Shami’s spirited six-wicket haul.

However, what followed was a complete batting failure from Bengal. Their pace spearheads had managed to put a lid on the lead, but their batters disappointed. Vikar Tokas removed Abhishek Raman for no score. Bengal’s downfall gained pace as they slipped from 33 for 1 to 44 for 5. Navdeep Saini was the top performer along with Kulwant Khejroliya. He claimed all his four wickets by dismantling the stumps. His wickets included the prized scalps of Sudip Chatterjee and Manoj Tiwary.

In addition, Khejroliya removed Abhimanyu Easwaran, Anustup Majumdar and Shreevats Goswami. Meanwhile, Writtick Chatterjee was run out for 1. In short, Navdeep and Khejroliya hunted in pack to decimate Bengal.

Bengal were dismissed for 86, thereby conceding the match by an innings and 26 runs. Delhi become the first side to qualify for the final, and will play the winner of Karnataka versus Vidarbha.

After a dominating performance in the semi-final against Bengal, Delhi make their way in to the @paytm #RanjiTrophy 2017-18 Final pic.twitter.com/jxwLPuRI5Y 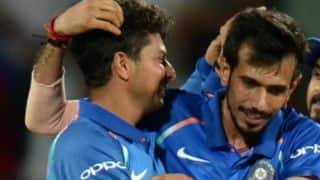