The live cricket streaming of the match between Mumbai and Karnataka will be available on Hotstar.

Karnataka were all-out on Day 3 immediately after Shreyas Gopal reached 150. Surya Kumar Yadav scored then scored, but Mumbai continued to struggle. The live cricket streaming of the match between Mumbai and Karnataka will be available on Hotstar, while the live telecast of the match will be available on Star Sports First. Karnataka are in a very strong position as Mumbai trail by 277 runs with the loss of three wickets.

After Dhawal Kulkarni bowled Abhimanyu Mithun for a duck, Mumbai would have fancied their chances of dismantling Karnataka under 500. Sreenath Arvind, Karnataka s last man, scored his second first-class fifty, adding 92-run partnership for the last wicket along with Shreyas Gopal, allowing Karnataka reach a mammoth total of 570 and taking a lead of 450.

Mumbai down and almost out

In the second innings Mumbai were restricted to 34 for 2 in 11 overs. The third wicket added an 80-run partnership, but it was just a matter of time till Akhil Herwadkar gave his wicket away.

Karnataka would look to bowl Mumbai out tomorrow and register their win by an innings and go to the semi-finals. 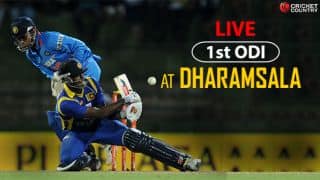