All-rounder Vijay Shankar and Baba Aparajith returned to the Tamil Nadu team which will take on Mumbai in a Ranji Trophy Group "C" match.

Chennai: All-rounder Vijay Shankar and Baba Aparajith returned to the Tamil Nadu team which will take on Mumbai in a Ranji Trophy Group “C” match to be played in Mumbai from October 24. Shankar and Aparajith, who were part of the India “A” squad that played the visiting New Zealand “A” in a limited-overs series, had missed the first two games and would bolster the side that would be without the services of stumper Dinesh Karthik, who is on national duty. Test opener Murali Vijay, who missed the second match against Tripura owing to a neck spasm, is back in the squad. All-rounder R Ashwin, who has not been picked in the India team to take on New Zealand in a three-match ODI series, would spearhead the spin attack, which also includes Rahil S Shah, M S Washington Sundar and R Sai Kishore. Ashwin s presence great learning curve for TN spinners

Paceman V Yo Mahesh was the surprise pick in the 16-man squad while newbie paceman V Lakshman, Malolan Rangarajan and J Kousik have been dropped. Opener V Ganga Sridhar Raju has also been included, a TNCA media release said. Tamil Nadu has got four points from two drawn games against Andhra Pradesh and Tripura. The team conceded the first innings lead against Andhra and had to settle for just one point. 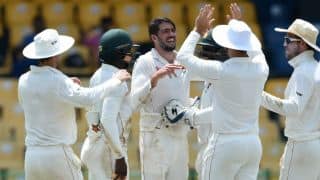