Dhawal Kulkarni remained wicketless whereas Gautam Gambhir perished for 6 on Day 2 of the quarter-finals.

Let us analyse how some of the top names fared on Day Two of the quarter-finals:

Agarwal is the prolific run-scorer in the current edition. He has amassed over 1,000 runs in November alone; comprising of a triple ton and four centuries. Simply unbelievable! He has set such high standards that his 78 will be termed as a ‘rare failure’ in the ongoing season. He miscued a short delivery to perish early, off Shivam Malhotra, against Mumbai on Friday.

Kulkarni had a ball with the bat in the opening day of the quarter-finals. Nonetheless, he remained wicketless, his primary role, putting Mumbai on the back foot. The pacer bowled with purpose and maintained tight lines, but remained unlucky. He found the edge of Shreyas Gopal (80 not out) in the fag end of the day’s play; which fell in no-man’s land.

Bengal rode to 354 courtesy lower order contribution. However, Gujarat’s tall batting lineup was expected to stand tall. They were reduced to 17 for 2 in no time when Parthiv joined Bhargav Merai. The skipper looked in ominous touch and was finding the gaps regularly. Nonetheless, his stay was cut short on 47. With Gujarat reeling at 180 for 6, the left-hander would be gutted for not converting his start.

Bengal have entrusted Dinda to inject regular breakthroughs. He has not disappointed in the season, and looked on course in Day Two. Earning the first wicket in Gujarat’s innings, he went wicketless from thereon. Dinda, however, was economical conceding less than 2 per over.

Reeling at 45 for 3, Vidarbha needed few vital stands to bail them from a precarious situation. Karn resumed the day, and added 31 runs to the scoreboard. The lower order managed to steer the side over 220, but would have got more had Karn stayed for long.

The biggest name of the lot, Gambhir, fell for 6. After Madhya Pradesh stretched their innings to post 338, Delhi required a stable start. The onus fell on their senior pro Gambhir. He smacked a boundary to commence before getting clean bowled by Ishwar Pandey. 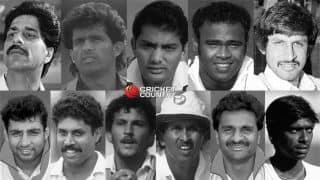